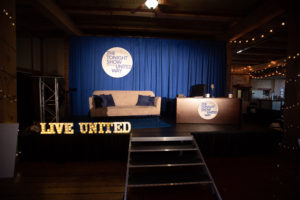 It’s not often that you can get a little bit of Hollywood in McHenry County. However, United Way of Greater McHenry County did just that at their annual campaign celebration on June 4th at Starline Factory in Harvard. With almost 200 supporters, donors and friends gathered, attendees were part of the live studio audience of the Tonight Show Starring United Way and were entertained with a late night, variety-style awards show.

Executive Director Carole Peters revealed that this year, due to the generosity of the residents and donors of McHenry County, United Way will be allocating $1.1 million dollars to our 29 local partner agencies, an increase of over $99,000 more than last year. The re-investment of these dollars back into our community is impressive and we are so grateful – definitely a reason to celebrate!

Along with revealing the amount raised, truly one of the highlights of every annual dinner is handing out awards to our community leaders and givers. Every June we recognize those who are passionate about United Way, this community and who are helping to elevate what we do. Congratulations and thank you to the following hand-raisers of McHenry County:

The Benchmark Award– awarded to companies who raise over $200,000:

The Milestone Award– awarded to companies who raised over $50,000:

The Breakthrough Award– awarded to companies who had a successful first year campaign or who had a high increase in participation and dollars from the previous year.

The United Participation Award– awarded to PolyOne Corporation (McHenry) for having 97% employee participation in giving to their yearly United Way campaign.

The Paul Schipp Memorial Volunteer of the Year Award– awarded to Karol Coats & Shari Hoffman of Follett School Solutions (McHenry) for being actively involved in their company campaign, leading a team of volunteers and finding creative ways to inspire their peers to give where they live.

The Servant Heart Award– awarded to Marilyn Zopp, longstanding volunteer for our partner agency Senior Care Volunteer Network for connecting seniors to the services they need, volunteering with compassion and touching the lives of hundreds in McHenry County.

The Innovative Campaign Award– awarded to Follett School Solutions (McHenry) for boosting participation through creative special events and fundraisers, in addition their traditional campaign, to raise over $29,000.

The Blackboard Award– awarded to Harvard Community School District 50 for raising over $9,000, the most of a school district campaign.

The Social Buzz Award– awarded to FASTSIGNS of Crystal Lake for using social media to engage the community and increase awareness of United Way and our partnership.

The Community First Award– awarded to the  team at Mercyhealth McHenry County for creating a culture of giving within and always putting McHenry County at the forefront  through Day of Caring Projects, running an active campaign and being present and willing to help other United Way partner agencies.

The Influential Leader Award – awarded to Pete Murray of Charter Dura-Bar for influencing others to inspire change, take action, say yes and develop a culture of giving back.

The Trailblazer Award– awarded to Jolene White of RE/Max Unlimited Northwest for being an entrepreneur who inspired the United Way #IPledge Campaign and encouraged and led the way for others to join in the initiative.