Give Where You Live Campaign Breakfast Kicks Off 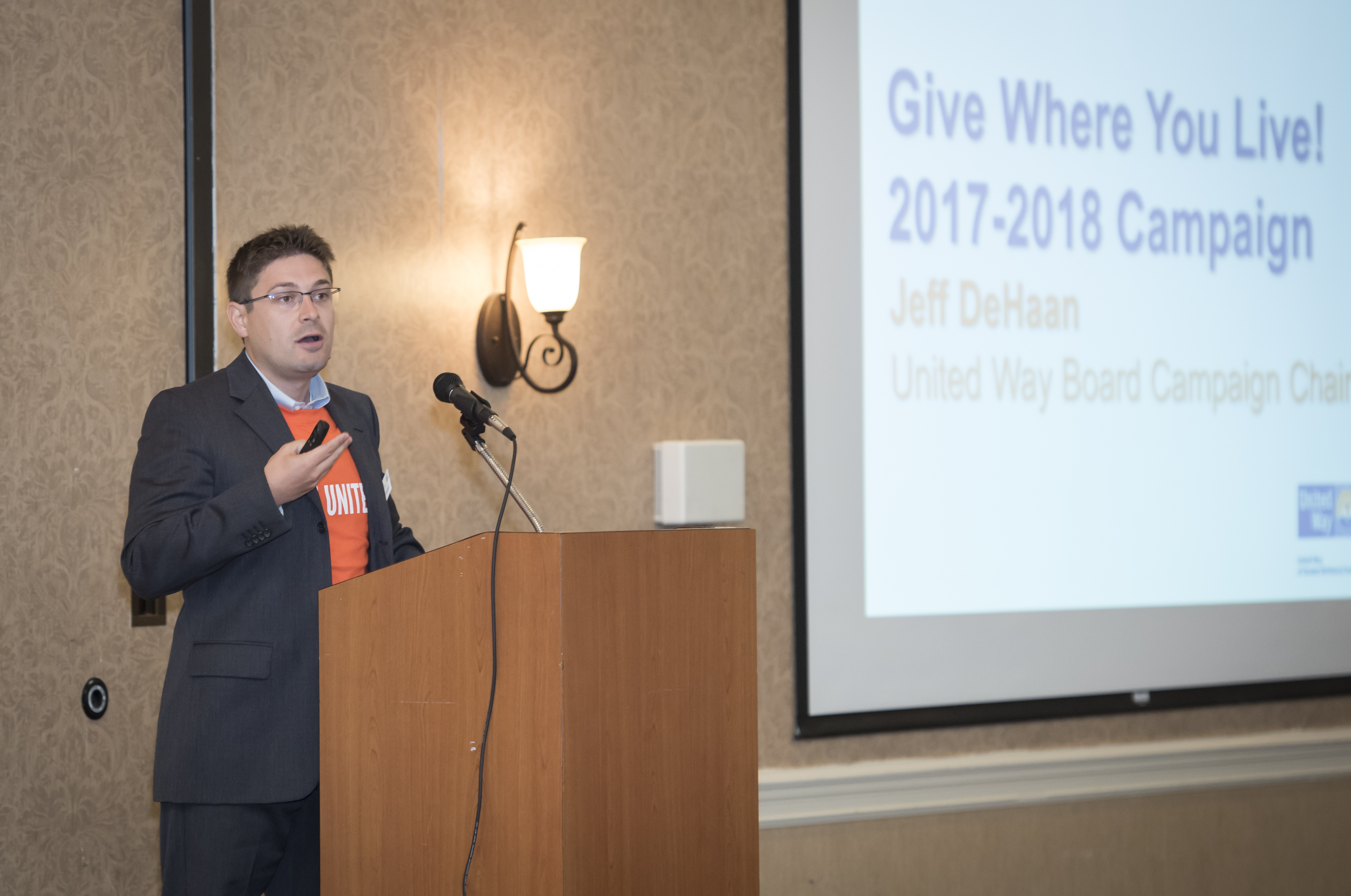 fundraising campaign with a Wednesday breakfast at the Crystal Lake Holiday Inn.

Two of them that stuck with me the most were “Give where you live” and “Hope isn’t a one-man band.”

The first is this year’s campaign theme. United Way-funded programs reached about 92,000 local residents last year, but “there are still more out there who aren’t receiving much-needed services” because of a lack of resources and funding, Jeff DeHaan, United Way’s campaign chairman, told the audience of about 150 people.

If more people donated to the United Way where they live, even more people who need vital community services can be helped.

DeHaan announced that this year’s fundraising goal is $1.5 million, an aggressive 20 percent increase over the $1.2 million raised last year. The local United Way hopes to reach that goal by adding potentially hundreds of new donors and business partners as well as increasing the amount of dollars that participants already donate, even if by a few dollars a week.

Wednesday’s event kicked off with a short video showing how the donations that United Way receives offer hope to our friends, family members and neighbors who need it the most.

But the narrator reminded, “Hope isn’t a one-man band.” It takes the generosity of a community to provide it.

And that’s where the United Way’s fundraising campaign, and you who are reading this column, come in.

In short, we need your help.

The McHenry County United Way, of which I am a volunteer board member, funds dozens of programs provided by 30 nonprofit human services agencies in the county.

Those agencies offer services to homeless people, the uninsured, victims of domestic violence, veterans, the mentally ill and developmentally disabled, the hungry, victims of drug and alcohol abuse and so many more.

Each year, these agencies come to the local United Way seeking funding support so they can provide these community services. Most years, the United Way can’t meet these agencies’ full request because there simply isn’t enough money.

Let’s work together to change that this year.

Patti Latzke of Woodstock is one of tens of thousands of local residents who have benefited from United Way, first from scholarships so she could put her children in day care programs so she could work, and then after-school care.

But the single mother later found herself unemployed with h er 14-year-old son. She couldn’t afford rent. Home of the Sparrow, one of United Way’s 30 funded agencies, stepped in and provided transitional housing until Latzke could get back on her feet.

“My son and I went and lived at Home of the Sparrow in a shelter for nine months,” she said. “So many things came out of that, it’s amazing. We were afforded a two-bedroom apartment with all the necessities of life. It gave us dignity, to be able to go find work … and most people didn’t know I was homeless.”

While staying at Home of the Sparrow, Latzke took cosmetology classes. She now gives back by cutting hair for the women and children who stay there.

Another United Way-funded agency is The Salvation Army of McHenry County.

Best known for its red kettle campaign during the holidays, The Salvation Army responded with food, water and other support in June when an explosion in Marengo damaged 40 homes, displacing dozens of families. It provided similar support to more than 800 families whose homes were flooded during the summer’s massive rainfall.

The United Way also funds the 2-1-1 Help Line, where McHenry County residents in need of services can call and find help.

Carol Peters, United Way executive director, said the agency also is promoting its message through social media and urged residents to like its Facebook page.

To learn how you can give or to start a campaign at your business, visit UWMcHenry.org.

• Dan McCaleb serves on the United Way Board of Directors and is chairman of the Pioneer Center for Human Services Board.